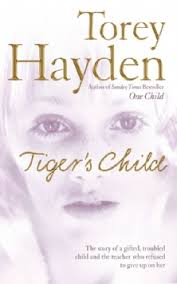 One Child by Torey Hayden

The time had finally come. The time I had been waiting for through all these long months that I knew sooner or later had to occur. Now it was here.

She had surprised me so much by actually crying that for a moment I did nothing but look at her. Then I gathered her into my arms, hugging her tightly. She clutched onto my shirt so that I could feel the dull pain of her fingers digging into my skin. She cried and cried and cried. I held her and rocked the chair back and on its rear legs, feeling my arms and chest get damp from the tears and her hot breath and the smallness of the room.

Sheila, a 6-year-old girl living in grinding poverty and raised by her single father faced some daunting odds when she entered Torey Hayden’s special needs class. Abandoned by her mother, beaten by her father and facing a court ordered sentence to a hospital after a particularly violent episode, Sheila was extremely aggressive and wary.

I could not put the book down. Torey tells such a fluent and engaging story about Sheila. It certainly spotlights the tragedies of this world. Neglect, physical abuse, and sexual abuse of children are something to be taken seriously. You will see a glimpse of the resiliency of a child in the extraordinary read One Child.

I adored how Torey read Sheila The Little Prince and Sheila knew she was tamed and special to Torey. Sheila desperately needed someone to care for her and care about her. Torey gave Sheila a piece of all the good in the world. It is horrifying what Sheila faces. especially the sexual abuse at the hands of her Uncle. Sheila flourished in Torey’s classroom and the reader becomes attached to the story.

It’s heartbreaking and happy, moving and monumental. I appreciate the compassion and determination of individuals who positively impact the lives of hurting youth.

Review: Call of a Coward

Call of a Coward by Marcia Moston

Moses never wanted to be a leader. Jonah ran away from his missions call. And when Marcia Moston’s husband came home with a call to foreign missions, she was sure God had the wrong number. His call conflicted with her own dreams, demanded credentials she didn’t have, and required courage she couldn’t seem to find. She promised to follow where God led, but she never thought the road would lead to a Mayan village on a Guatemalan mountainside.

From the trecherous road trip to their new village home, to learning to navigate a new culture, to a stateside mission field in Vermont, Moston’s journey reveals that God leads just as clearly today as he did in biblical times. Her candid account tells a story of learning to trust and obey when faithfulness seems foolish.

This book is a sweet and humorous insight into Marcia’s relationship with God and pursuing his purposes. She shows courage and strength as she sets out to be a missionary with her husband and young daughter. I received Call of a Coward through booksneeze. I would recommend this book as a story of faith and God’s power to always provide. Some details are lacking as it seems more of a highlight of several years of her life rather than an in-depth experience.

The goal behind this book is to show that God is always in control and can turn cowards and ordinary people into courageous servants. Marcia relies on signs from God to move her. Marcia’s faith is continually tested as she moves with her family to a village in Guatemala to oversee the orphans and widows home. They experience many difficulties on their trip including the dangers of traveling outside of the United States. This is eyeopening to remember how safe and comfortable we are in the states. She battles between conviction and logic as she forges forward. This book is conversational and light. It’s easy to envision the family on this marvelous trek. Certainly makes you wonder if you’ve got the faith to abandon all that you know and follow God.

At times my faith had the attention span of a four-year-old. I had to keep wrestling down the conviction that God was more in control of her life than I was. -p84

When this life doesn’t make sense, it’s good to remember you are just traveling through. -p129

Hope does not disappoint. -p153